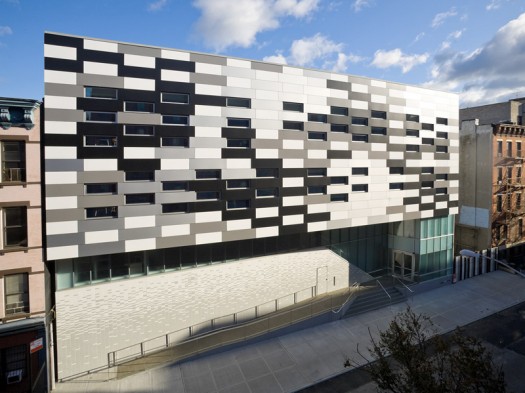 Recently the staff of the Architectural League had the opportunity to visit The East Harlem School at Exodus House, an independent middle school on East 103rd St. EHS co-founders and brothers Hans and Ivan Hageman grew up on the site when Exodus House was a residential drug rehabilitation center, founded in 1963 and run by their parents. Growing up in East Harlem while attending the prestigious Collegiate School, the brothers were confronted daily with the acute imbalance between the opportunities and resources available to their fellow students as compared to their neighbors, and the socioeconomic biases that fed the disparity. The Hageman brothers wanted to bring the quality education they had experienced to the residents of their community.

When the rehab center closed its doors, Exodus House was converted into an after school and summer program in 1984 before transitioning into the year-round middle school in 1993. After years in the iron-gated building that had housed the rehab center, after-school program and the first years of EHS, the Hagemans and the board decided to pursue construction of a new school. The building, designed by Peter Gluck and Partners, opened its doors in December 2008. Peter Gluck is known for his focus on socially responsible design/build work and is fervent in his belief that architects should take responsibility for and oversee all aspects of a project, from design to construction. (Stephen Zacks described Gluck’s office, in a 2007 Metropolis article, as functioning “like an unofficial postgraduate program for discontented designers who actually want to learn to build something.”)

We were led on a tour of the new building by two EHS eighth graders, Tyler and Leilani, with help from Gluck and Project Architect Stacie Wong, who shed some light on the school’s unique operations as well as its flexible and beautiful space. After our tour we sat down for a conversation with Gluck and Ivan Hageman, the dynamic co-founder and head of EHS, who outlined what makes the school distinctive and how the building reflects that. Luckily, we brought our flip-cam with us:

Peter Gluck later elaborated on his experience working on The East Harlem School, his approach to school design, and why school design matters.

Urban Omnibus: How did your role as both designer and construction manager affect your process?

Peter Gluck: Completely. In the traditional practice when the project exceeds its budget, costs are reduced through value engineering which comes always at great expense to program and quality. Our response to this classic dilemma is to integrate the building’s construction with its design. What we try to do is “pin the tail on the donkey,” which is to truly and appropriately use all available budget, so that the building is neither under- or over-designed. For example, East Harlem was originally a swamp and the site, located in a 100 year flood zone, had a high water table. The foundations required complicated friction piles to anchor the building to keep it from floating, and complete waterproofing of the lower floors. The cellar slab was raised to be just above the water table, making the first floor 3 feet above the sidewalk. This raised first floor required a ramp from the street for ADA requirements, so we turned this into a positive asset: the ramp created a processional space for the students arrival to school. It allows Ivan to monitor the morning procession from his office perch.

Our dual role also allowed us to participate completely in the construction process and involve the manufacturers and sub-contractors in the development of the design. By engaging the actual players in relation to their specific area of expertise, we were able to partner with vendors creatively and give them a sense of ownership over the final product. Our willingness to partner in product design with a locker manufacturer, for example, allowed us to produce distinctive, custom-designed lockers at a standard price. The design team with EHS students | Photo by Theo Morrison

UO: What choices were made to reflect EHS’s pedagogical mission?

PG: Ivan sees a dual role in his pedagogy: serious study and academic pursuit and the importance of community engagement in the pursuit of common goals. This is most clearly articulated in the primary concept for the section and elevation of the building. The upper floors house the classrooms and their more solitary and sheltered endeavor behind the pixelated screen façade, while the lower portion contains more open public spaces, where student and teacher movement and activity is sensed from the street.

Ultimately budget constraints pushed us to a smaller multi-window scheme, which was inherently less expensive. We turned this to our advantage, by relating the scale and shape of the window to the neighboring windows, and by creating the potential for different light conditions by giving the teachers the ability to customize their classroom environment with operable windows and shades. Corridors were also conceived as rooms, to allow casual teaching-student moments to occur outside the classrooms. By programming in multi-use purposes for circulation spaces, it de-institutionalizes the hallways and gives a sense of place.

Thinking to the school’s future, we worked to maintain a level of flexibility throughout the building. The rooms can be reconfigured at anytime to accommodate the changing needs of the school as its pedagogy evolves. By using long-span structure with deep lateral beams, we were able to keep all the classroom walls as non-structural partitions. The concentration of the mechanical ductwork and equipment in the corridor ceilings also allows the space from the corridor out to the façade, front and back, to be flexible. UO: Why do you think school design matters and how can we encourage more innovation in the design of learning environments?

PG: Oftentimes school buildings are overlooked and seen as infill buildings. But in fact they are extraordinarily relevant as public buildings which can become the hearts of their neighborhoods. They have the potential to introduce real civic architecture to the inner city. They function as the expression of our times in the urban context. As for innovations in the design of learning environments, I think it is more often the case that innovative school projects are produced by architects who don’t necessarily specialize in a specific building type. They tend to bring a level of creativity and openness to the design process that yields interesting, rather than formulaic results. The design and efficacy of learning environments is a lively topic these days. To explore the issues in greater depth, check out some of these links:

• In July 2009 at the Aspen Ideas Festival, U.S. Secretary of Education Arne Duncan remarked, “It’s not about the building, it’s about the children.” Architecture for Humanity founder Cameron Sinclair took issue with Duncan’s remarks on the Huffington Post, reminding us that the way we design and build our environment testifies to our priorities in powerful ways. (Sinclair, with his colleagues at the Open Architecture Network, also focused last year’s Open Architecture Challenge on classroom design.)

• In the early 1990s, not long after New York City’s School Construction Authority was created, the Architectural League partnered with the education advocacy group Public Education Association to propose ways to build small schools. The small schools movement was gaining steam as an important way to improve student learning and achievement, but in terms of facilities, the conventional wisdom had it that creating small school buildings was too expensive and too administratively difficult to be broadly feasible. New Schools for New York (available from the Architectural League), the book published to document the League/PEA design study that proposed alternative ways to build small schools by opportunistically using the fabric of the city and its overall development, is relevant and interesting almost twenty years later as New York continues to struggle to provide enough classroom space for its schoolchildren.

Gluck addresses a key point: careful attention must be paid to the design quality, scale and flexibility of schools, but also to their capacity to foster or inhibit learning and teacher-student and peer-to-peer relationships. Yes, we found The East Harlem School beautiful, but the ultimate achievement of the building is shown best by seeing it in use. Tyler and Leilani took pride in showing us their school and recounting the activities that take place in each space. We witnessed first hand the success of the communal areas, sitting in on a lively school-wide weekly gathering after our tour. The approach to the school was welcoming, and the respectful and warm relationship among students, teachers, and administration was clear even in brief encounters in hallways. Architectural analysis is too rarely explored post-occupancy. As we herald the importance of the design of learning environments, we must also look to the way these spaces are used by students, teachers and administrators as a crucial indicator of their success.  –V.S.