Digital Engagement: Change by Us NYC 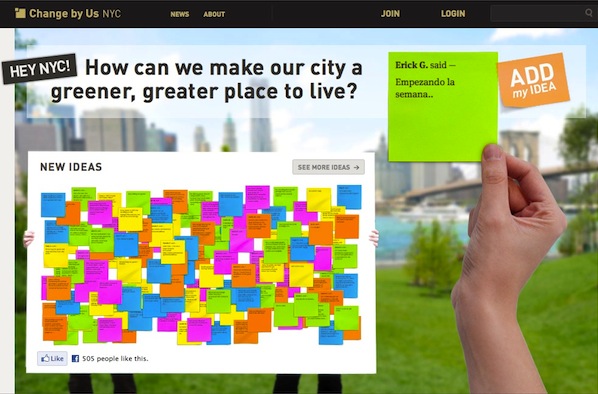 Ideas for civic improvement on the Change by Us home page | screen grab of http://nyc.changeby.us/#start

Over the past year, a growing number of online platforms devoted to civic improvements have been launched in cities nationwide, many of them right here in New York. The Institute for Urban Design launched By the City / For the City, asking New Yorkers to generate ideas on how they want to improve the public realm, and then calling on designers to respond to these ideas for the forthcoming exhibition and catalogue Atlas of Possibility. This past May, we here at Urban Omnibus compiled Fifty Ideas for the New City, online and in poster form, and asked readers and visitors at the Festival of Ideas for the New City to suggest their own.

The City of New York has been inching toward a digital revolution for some time. In January, Mayor Bloomberg appointed Rachel Sterne, a 27-year old former web entrepreneur, as the City’s first Chief Digital Officer. Soon after, the City released its first-ever Road Map for the Digital City, which lays out a plan to provide more access to the web, improve connectivity, and embrace the growth and influence the web has had on business and personal interaction. And then there are specific web-based services, such as NYCService, a platform for connecting non-profits to volunteers, and 311 Online, the digitized version of citizen hotline 311.

Most recently, the City of New York announced a new digital platform for civic engagement: Change By Us NYC. This online forum is a place “to share ideas, create projects, discover resources and make our city better.” Created by media design firm Local Projects, Change by Us is an adaptation of their earlier project Give a Minute, which has been applied in Chicago and Memphis and is coming soon to San Jose, Philadelphia and Seattle. Change By Us allows users to input ideas by text message and on the website. Based on those ideas, people are directed to “project groups” which connect them with other visitors. By hosting both “‘ideas” and “‘projects,” the site is intended to foster a sense of community through team building and shared resources. The site aims to build a social network for civic engagement by connecting like-minded ideas, people and projects and directing those ideas toward government and non-profits who can make them happen. Last December, we spoke to Jake Barton, founder and principal of Local Projectsabout the Give a Minute project. This week, we checked in with Barton again, and asked him a few questions about Change by Us NYC:

Change by Us NYC is described as an “evolution” of your other successful civic platform Give a Minute, which was announced as a forthcoming NYC initiative by Mayor Bloomberg in January. How will the new platform be implemented differently?

Give a Minute was a crowd-sourcing platform which allowed anyone to put in their ideas and have them reviewed by various City leaders, whether in government, not-for-profits or business. It was a really exciting way to get people to share their inspirations and innovations with each other and with the City. Change By Us is a platform for actualization. It moves New Yorkers from ideas to solutions, connecting them with projects that make their city better.

You have said: “Change By Us is a moment of transition when residents move from consumers to partners. It’s a way of reinventing public participation.” How will this digital platform increase transparency or connect individuals to organizations, city agencies or other people in any other way than has historically been the case?

Rather than look to the City as the singular provider, Change by Us allows New Yorkers to be partners in innovations and improvements, putting together ideas and initiatives on a local level that are connected to larger organizations like not-for-profits, businesses or government. It is a consolidated approach to improving the city that doesn’t segment between any type of organization, but focuses on the ideas that can make the city better.

How do you think Change By Us will work to effect change? What mechanisms are in place for ensuring that the ideas don’t just stay on the Internet?

Right now there are modest tools for actualization that focus on setting goals, and communicating between project members to achieve those goals. We’re looking to those who start projects to have the passion and tenacity to make their projects real by organizing and taking action. Like all social software, we also have community managers that are starting to go through the site to find projects and advise the project leaders.

How does Change by Us differ from 311 Online?

311 Online is really about access to general City resources, whereas apps like SeeClickFix are really about identifying specific problems for the City to fix. Change By Us is meant to be a platform that frames challenges and provides resources so that New Yorkers themselves can help solve them. The City has some official projects on the site, like the One Million Trees project, but that’s not what powers Change By Us. The New Yorker-led initiatives are at its heart.

How can users connect with the “Network of Listeners” to ensure that their ideas and suggestions are heard?

The goal is to get people who are submitting ideas to join a project and make it happen on their own, using the resources and tools that the site allows. If City leaders listen, and endorse and champion projects, that is just another way to encourage projects to become a reality.

Are you expanding Change By Us and/or Give A Minute to other cities?

We’re slated to launch in Seattle, Philadelphia and San Jose, but are interested in launching in any and every city around the world. By the end of the fall we will have some multi-lingual aspects implemented, as well as a variety of new project tools like video and photo sharing and more, to help us scale up. We’re hoping that Change By Us really is part of a paradigm shift inside cities that mirrors the participation we’re seeing in so many other institutions. We want the people to be able to grab hold and change their cities! DIGITAL ENGAGEMENT
The arrival of Change By Us into the digital playing field of civic engagement raises questions: what potential do digital platforms offer for actually improving our city’s public realm? Some of the greatest coalition building and community improvement projects have stemmed from small, citizen-led involvement from the ground-up. Will these platforms benefit small, active groups or offer anything that Facebook, Twitter or Google can’t already provide? More importantly, if decision-makers and proponents of change are thumbing through these ideas, how can we ensure that they adequately represent the needs of all of our citizens, not just a small group of privileged Internet users?

Digital platforms for civic engagement provide users with a diverse set of tools. Change by Us offers a way for people and groups to share best practices and engage with one another to implement change. In a partnership with non-profit Citizens Committee for NYC, Change by Us will offer micro-grants of $500 – $1,000 to community groups seeking to implement ideas shared on the site. Another partner is the online site, ioby, a riff on the Kickstarter model to offer environmental and neighborhood-based groups a platform for fundraising through multiple small donations.

Online platforms like Change by Us will continue to develop and, I hope, will add to the landscape of civic engagement that currently exists in a meaningful way. But it looks like it’s up to us to make sure it is more than just a digital suggestion box.

Alicia Rouault is an Assistant Editor at Urban Omnibus. When away from the Omnibus desk, she spends her time working for the City of Newark’s Division of Planning and Economic Development assisting Waterfront Planner Damon Rich. She is currently a Masters Candidate in City and Regional Planning at the Pratt Institute with an interest in urban waterfronts, data visualization, community advocacy, graphic design, and mapping.

Everyblock renders the heretofore-obscure workings of neighborhood life explicitly, in something not too far off of real time, and in unprecedentedly high resolution.

The Public-Private Push for Urban Informatics

Rendering of CUSP’s future home in Downtown Brooklyn | Image via NYC EDC New York City Mayor Michael Bloomberg is a long-time proponent of the power of data and technology to deliver useful, actionable information across all categories of professional fields and environments. He became…