In this series of photographs, Cameron Blaylock documents Electchester in Pomonok, Queens. Images from all five series will be on view in the Architectural League / Urban Omnibus booth at the IDEAS CITY Festival StreetFest on Saturday, May 4th. Click here to learn more about Typecast, or to see photographs of four other study sites. But first, a brief introduction to Electchester.

Electchester is a cooperative housing complex in Pomonok, Queens, built between 1949 and 1966. Harry Van Arsdale, Jr. worked with the Local 3 of the International Brotherhood of Electrical Workers to purchase 103 acres of the former Pomonok Country Club and build apartment buildings. Today, 5,550 people live in approximately 2,500 units in 38 buildings, many of which are six-story brick structures. The community is served by Public School 200 (built on land donated by the development) and retail developed with the original apartments. The union provided the majority of the financing and New York State offered tax abatements. Electchester was classified as a “limited dividend nonprofit,” subject to state regulations similar to Mitchell-Lama. Through the 1980s, about 90% of units were occupied by Local 3 members, far higher than other similar union cooperatives in the city. As of 2004, closer to 50% of residents are electricians, with another 10% having family ties to the union. Recently, residents are increasingly discussing a desire to sell their shares on the open market.

Adjacent to Electchester is NYCHA’s Pomonok Houses, which contain 2,070 apartments in 35 buildings on 51 acres, creating more than 150 contiguous acres of Queens where towers-in-the-park are prevalent.

Update: Read an article about Electchester by labor journalist Ari Paul, in which he uncovers the history of what sets this development apart from much of the rest of union-built housing in New York and sees an example that provokes questions about how to meet contemporary housing challenges, published December 18, 2013 — D.R. 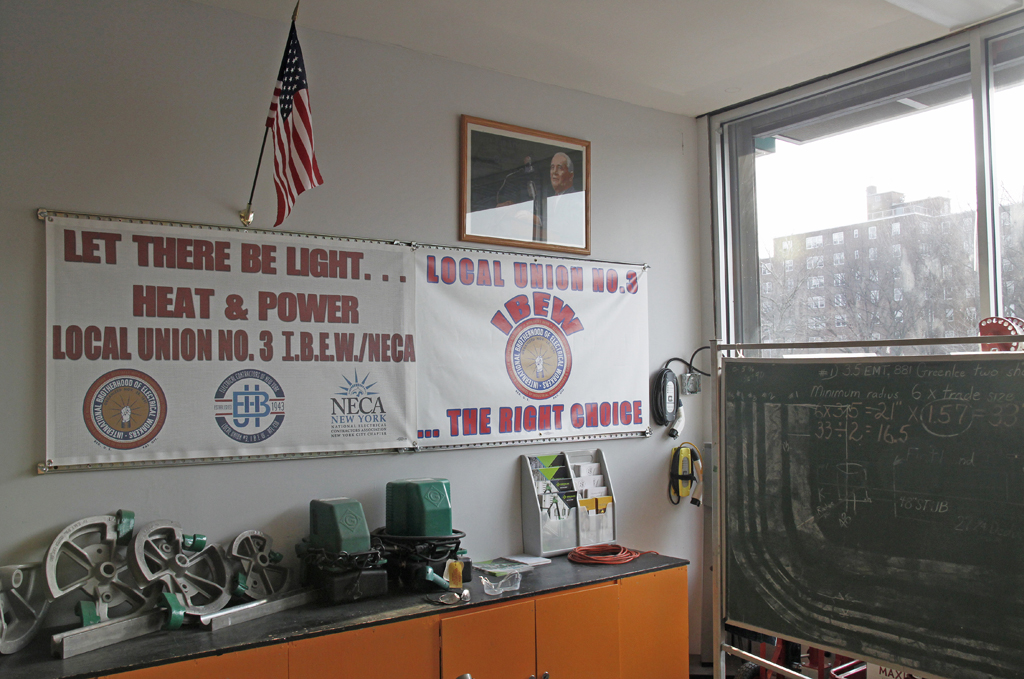