NORC is a funny word, but we didn’t make it up. On the contrary, the word is recognized by the local, state, and federal government, and has been in use since 1986. Actually, NORC is an acronym. It stands for “Naturally Occurring Retirement Community.” Basically, a NORC is a place (a building, a development, a neighborhood) with a sizeable senior community that wasn’t purpose-built as a senior community. What counts as a “sizeable elderly population” varies from place to place (and from one level of government to the next), but NORCs are important because once a community meets the respective criteria, it becomes eligible for local, state, and federal funds retroactively to provide that community with the support services elderly populations typically need. These include (but are not limited to): case management and social work services; health care management and prevention programs; education, socialization, and recreational activities; and volunteer opportunities for program participants and the community.

As it happens, there are 27 NORCS in New York City, located in 4 boroughs. NORCs are a national – even international – phenomenon, but the NORC movement began right here in New York City, when a consortium of UJA-Federation agencies established the Penn South Program for Seniors in 1986.

If we zoom in, we see that almost all NORCS are towers-in-the park, that much maligned mid-century planning typology. Moreover, 19 NORCS are in Limited Equity Housing Coops, built mostly in the first half of the twentieth century by unions to house their swelling ranks of workers.

But we’re getting ahead of ourselves. Let us say a few words about why we’re so interested in NORCS.

First of all, the “naturally occurring” part is intriguing. We’re interested in these sorts of bottom-up dynamics, and have explored them in previous projects.

But more importantly, we’re interested in NORCS because we like them, and like what they do for the city. Of course, one of the greatest things about New York City is its diversity. New York City is a city that is supposed to tolerate – and maybe even encourage and engender – difference. New York is supposed to be a city where people of different races, classes, and lifestyles coexist, right? Well let’s not forget that generational diversity is an important part of this ideal: just as NYC would be undermined by racial homogeneity, so too would it be undermined by age homogeneity. Now in some ways, this threat of age homogeneity is a very real one: Manhattan, for example, is becoming whiter and younger. Of course, we also like what NORCS do for the elderly. People grow old, and instead of moving to a purpose-built retirement community in the suburbs or the sunbelt, they stay in the home and the community that they always lived in. “Aging in place,” as some people call it, poses some challenges, but to NORC advocates, the advantages outweigh the disadvantages. As the UJC states, “by all accounts, the vast majority of older Americans want to, or by necessity, will remain living in their own home, even as they grow frail.”

So what we’re working on is an “Advocates Guide” to NORCs. We’re enthusiastic about NORCs, and we would like to see more of them, and so we thought it would be a good idea to develop a book that would make the case for NORCs very clearly, but also supply people with a few items – postcards, maps, advertisements for example – that could help “sell” the NORC. Before we show you the book, we would like to give you some background on the project.

In 2006, we were invited to do an exhibition at common room 2, a space on the Lower East Side headed by Lars Fischer, Maria Ibanez De Sendadiano, and Todd Rouhe. The exhibition space was in the lobby of common room’s office, a commercial building in the Seward Park Cooperative complex. As we started planning the exhibition, we noticed that the lobby, which was used by all the people associated with common room – cool architects, designers, and artists – was also inhabited by elderly people with heavy New York accents and canes. It turns out that the building is the epicenter of Seward Park’s senior culture: a large-windowed second story office that houses the Seward Park NORC Supportive Services Program, or NORC-SSP. The NORC-SSP is a gathering place for Seward Park’s seniors: a place to organize transport to the doctor, sign up for meals on wheels, get a flu shot, play bingo, take a yoga class and so on. We saw this ground floor lobby as a space of encounter among the building’s different constituents: the architects and designers who worked in the building, exhibition visitors who came to see common room 2 shows, and the NORC SSP seniors who used their community room to take care of their health needs and to socialize. We built our exhibition around trying to increase the interaction (positive friction?) among these groups, and in particular, between people who made use of NORC social services and people who visited the exhibition. In many ways, this space embodied ideals of “the good city.” As an urban space in which people of difference have chance encounters, it is just the sort of space that the homogenization of Manhattan is endangering. Believing that there is a value to having different types of people rub shoulders in the same space, we started to investigate how this group of seniors – in the face of a meteoric rise in real estate values and increased living costs – managed to stay put among their friends on the Lower East side.

So we discovered that Seward Park is just one of many communities in New York that has NORC-SSPs. So this again was the impetus to advocate for the NORCs. Let us take you through some of the information in the book.

The first part of the book is informational: We begin by mapping out the NORCS.

We then look at the history of each, noting when they were built, and when they became NORCS. We mentioned that Penn South was the first NORC: it was established in 1986. You’ll notice here that most NORCS in NYC were formed in 2000: this was because, in 1999, building on an earlier state effort, New York City allocated $4 million to strengthen the city’s 12 existing state-supported programs and to establish 16 new programs in moderate and low-income housing complexes. You’ll also notice that most buildings that have NORCS were built between 1950 and 1976. A lot of the buildings were in fact built with urban renewal funds. (This is probably clear by looking at this look at the area around Penn South in Chelsea.)

We ranked the NORCS by population. . . 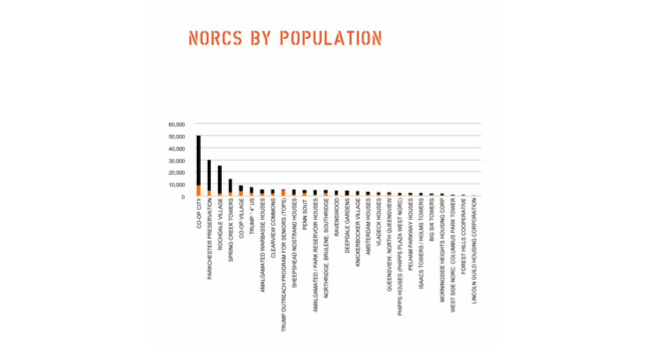 And by percent senior. You see that while Co-Op City in the Bronx is the biggest, in fact only 18% of its residents are senior, compared with, say, Queensview, which is about 55% senior. The next part of the book consists of profiles of all 27 NORCs: here is a sample page. It consists of an axon, pictures, a site plan, a short blurb, and some fun facts. Next comes a chapter that tells the story of the NORC: what it is, why it exists, etc. We mentioned earlier that most NORCs are limited equity housing co-ops built as towers-in-the-park. This is not a coincidence. On the contrary, our research showed that the economic and social conditions that led to the creation of limited-equity cooperatives in New York City are perhaps the most significant influence in the emergence of NORCs. Let us take a minute to explain: when you buy into a limited-equity cooperative, you spend less than you would on a market apartment, but you are also forbidden from selling your unit on the open market. Instead, you have to sell your unit back to the cooperative at a below-market rate. Selling low is a trade-off for buying low: this is what keeps housing prices in the coop affordable. One result is that when market prices of residential real estate rise, residents of limited equity cooperatives have little incentive to sell, since the sale price will not bring in enough money to buy a comparable apartment on the market.

As Tony Schuman describes in this article “Labor and Housing in New York City: Architect Herman Jessor and the Cooperative Housing Movement,” the limited-equity cooperative apartment projects that were developed from the 20s to the 70s by Jessor and others were inextricably linked to organized labor. The cooperatives were developed by unions – most notably the Amalgamated Clothing Workers Union (ACW) – and engaged non-profit organizations, and the cooperative residents were unionized workers. This combination of residents having no economic incentive to leave, and this “lefty” tradition committed to cooperative living and working, created the ideal circumstances for NORCs to emerge.

But the fact that these limited equity housing co-ops were all built as towers-in-the-park is essential to the story too: We quickly discovered that the so-called “tower in the park” is the ideal architecture for a community of seniors: elevators, wide hallways, communal green spaces, shared facilities, shopping and services typically on the same block, and so on. Funnily, in recent years, so many tower projects have been criticized or taken down because of the belief that such architecture creates estrangement and social problems. Here, we found just the opposite. Could it be that NORCs provide a new “calling” for this much-maligned modernist housing typology?

This leads us to the next part of the book, in which we begin the work of advocating. That is, now that we know what a NORC is, where they are, and how they evolved, we need to make the case that they are, in fact, desirable. So here are some diagrams demonstrating one benefit of the towers-in-the-park: the fact that travel times are shorter. But, of course, the best way we can make the case for NORCs is to give NORC residents a voice: NORCs in NYC by Interboro: Coming soon to a website near you!

Interboro is an urban design, planning and architecture firm based in New York City that was founded in 2002 by four graduates of the Harvard Design School. The firm works at a variety of scales with a variety of public and private clients to deliver innovative, award-winning results. Interboro’s working process combines expertise in global development trends with sensitive and rigorous analyses of local dynamics.

This project was supported in part by a grant from the New York State Council on the Arts. To read more from other NYSCA Architecture and Design grantees, check out our ongoing series of NYSCA Project Reports on archleague.org.