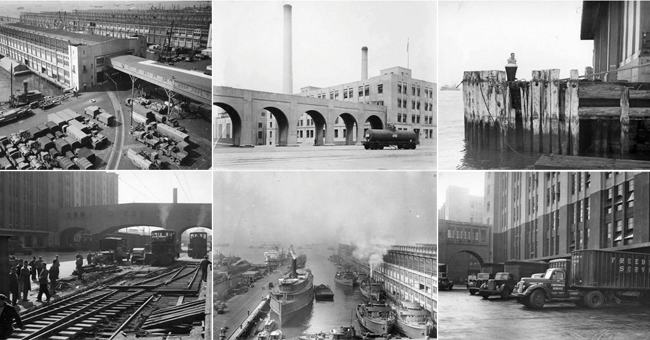 One week from Saturday, on September 17th, the Architectural League will be hosting the 2011 Beaux Arts Ball at the Brooklyn Army Terminal. The Ball is a tremendous event with historical chops. Started in the late 19th century by the École des Beaux-Arts, this tradition has since become a staple of architecture schools around the country. The League held its first Ball in 1990, and it now serves as an annual benefit to support the many programs of our beloved institution. Each year, the Ball is held in a different, architecturally-distinct place — including the Seagram Building, the Synod House of the Cathedral of St. John the Divine, the Old American Can Factory, the American Academy of Arts and Letters — which is transformed for the event by an invited group of emerging architects (click here for photos from recent years).

This year, we’re heading to Sunset Park to party in the central atrium of the Brooklyn Army Terminal (BAT). The BAT has its own compelling history, one that is probably unknown to many of today’s New Yorkers. So, in anticipation of this month’s big event, we bring you a look back at the history of this sprawling waterfront complex. In addition to digging through the archives, we had a chance to sit down with Carmine Giordano, the BAT Facilities Director for the past 23 years and a lifelong resident of Sunset Park, to hear about the facility’s recent life. In April 1918, the US War Department took over what was then the Langley estate on the South Brooklyn waterfront for the purposes of building a military depot and supply base. The architect placed in charge was Cass Gilbert, one of the founding members of the Architectural League, known for such works as New York City’s Woolworth Building, the US Custom House, the New York Life Building and the United States Supreme Court in DC. The utilitarian design of the BAT was an exception in Gilbert’s catalogue of projects in the Beaux-Arts and Neo-Gothic styles. Under Gilbert’s design, the original 97-acre site became home to two warehouses, three multi-story piers (two of which have since been lost to underwater termites), a rail yard and a network of tracks running between the buildings and through the atrium spaces. The central atrium — a massive, four million cubic foot space — is lined with concrete balconies, staggered to allow loading and unloading of goods from rooftop cranes. Covered sky bridges connect the complex’s buildings, and the installation of 96 centrally-controlled, push-button elevators was the largest of its time. “The military used Building B, which is 2.2 million square feet, just for supplies. People were stationed in Building A, which is 1.8 million square feet,” Giordano described. “When I first got here, the City hadn’t renovated Building A yet. There was still a bowling alley, a restaurant, their cots, a post office. It was amazing.”

After just 17 months of construction, at a cost of $30 million, the BAT opened on September 6, 1919. “They broke records,” Giordano noted. “This project was in the Book of World Records for how much concrete was poured and mixed in a day. And this was in 1918. Their equipment was a horse and wagon.” Barely open in time to see soldiers returning from WWI, the BAT would wait another 22 years to see its peak of activity. 56,000 military and civilian personnel were employed at the BAT during WWII, and an additional three million troops and 37 million tons of supplies traveled through. The activity often spilled into the neighborhood’s streets and sidewalks. “My father used to say that, once workers began to go home in the evening, you couldn’t come near this area until 10pm,” Giordano recalled from his childhood. “It took hours for the cars and the people walking to pass through.”

After the war, the facility remained active. Supplies and servicemen again passed through the BAT during the Korean War. In July 1956, survivors of the collision between the ocean liners Andrea Doria and Stockholm were brought to the BAT, as were thousands of Hungarian Revolution refugees in 1957’s “Operation Mercy.” This legacy of the site, providing safe passage to survivors of disaster, was revisited ten years ago when the BAT’s sole remaining pier was opened to help ferry people out of Manhattan on September 11, 2011. “They diverted the Staten Island Ferry to get people here from Pier 11,” Giordano recalled. “People were lost, they didn’t even know they were in Brooklyn. I didn’t go home for seven days.” But what might be the BAT’s most famous entry into the nation’s historical memory came in September 1958, when hordes of fans and photojournalists turned up to see Elvis Presley ship out to Germany. In 1964, the Brooklyn Army Terminal was identified by US Secretary of Defense Robert McNamara as one of 95 military bases deemed unnecessary for national defense and thus should be closed to cut costs. By the end of 1966, all cargo and passenger traffic had been diverted to Bayonne, New Jersey.

News of the deactivation of the BAT immediately piqued interest from the City of New York, which announced an intent to acquire the site for maritime development. But it was the federal government that leased much of the space through the 1970s. “It lay unused for most of the 1960s,” Giordano said, “but in the ‘70s it saw some occasional use. There was a big fire at the US Post Office in the city. They used the first floors of BAT as a post office for a couple of years until they could refurbish the damaged space.”

New York City bought the complex from the federal government in 1981, with the intention of finding a developer to refurbish the space for commercial and light industrial use. When that fell through, the City began a phased renovation in 1984 under the management of the New York City Economic Development Corporation. The final phase was completed in 2003, making a total of  2.6 million square feet available for use. Now, the BAT houses over 70 tenants from the arts, sciences, finance and technology. BioBAT, a non-profit partnership between the NYCEDC and the Downstate Medical Center, has taken over 500,000 square feet of Building A for life science research, development and bio-manufacturing space. Last year, the NYCEDC announced a call for proposals for a $10 million smart grid demonstration project that would install a 50,000 square foot photovoltaic panel array on the BAT roof.

The City’s efforts to reactivate light manufacturing and invigorate our working waterfront reach beyond the Brooklyn Army Terminal. Similar plans are in the works for the rest of the Sunset Park Waterfront, as outlined in the NYCEDC 10-year Vision Plan for the area. The Brooklyn Navy Yard has been the focus of an eight-building, 40-acre expansion and refurbishment. The NYC Department of City Planning’s Comprehensive Waterfront Plan, Vision 2020, highlights the support of waterfront industry as a crucial strategy in keeping our city vibrant, from improving regional freight rail to dedicating resources to increasing opportunities in industrial business zones. In pursuit of these goals — to develop and renovate pockets of our city to improve economic growth and revitalize neighborhoods, all while recognizing the value and longevity of well-designed, beautiful spaces — the story of the Brooklyn Army Terminal is one worth telling.