Beneath the FDR, steel beams boast a first coat of “Almost Purple,” and neon marks where vulnerable seams need some extra color.

A portion of the Lower Manhattan waterfront is becoming increasingly purple. The East River Waterfront Esplanade is a long narrow park adjacent to the Financial District, Chinatown and the Lower East Side, that runs under the FDR Drive. The girders and columns that hold up this area of highway have recently come to be defined by a lilac look. As the final coats of color are applied to the structure, we ask, “Why purple?” Concerns with beautification and public health both underlie the miles of unusual hue and underline the unexpected changes that a design for a complex public space can set in motion. Brooklyn Bridge can be seen in the background, looking north from this spot on the Esplanade, located close to the dog run. The repainted area extends from Old Slip up to Pier 35.

Initially, purple paint was specified for a single girder, a small element in a larger plan to upgrade the Esplanade. The New York City Economic Development Corporation’s (NYCEDC) 2005 concept plan “Transforming the East River Waterfront,” promised to reconnect the surrounding communities with the river, and open up the stretch of the waterfront to the kind of lively use it had seen in the 1950s when many working piers and fish markets defined the area. By the 1980s the city had cordoned off entire portions of the waterfront to stop the space from being utilized by the homeless, and by the early 2000s what space was still open to the public was predominantly used for car and bus parking. 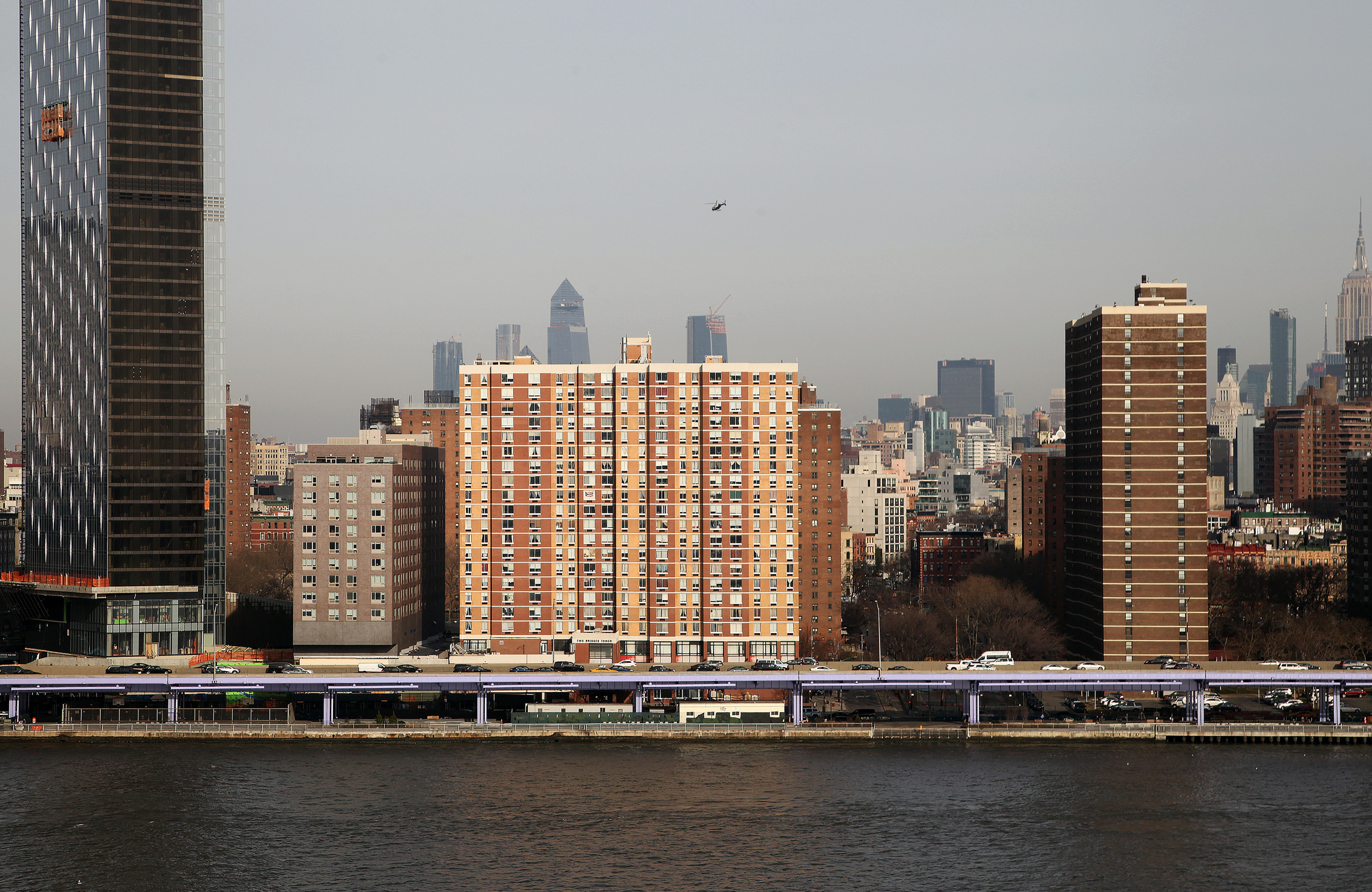 View from the Manhattan Bridge.

A new plan by SHoP Architects and Ken Smith Workshop called for new buildings, seating, and green spaces along a two-mile trajectory. Initially, the underside of the highway was to be clad with a sound-absorbing skin that included recessed lighting. Budgetary constraints and the requirement that the area remain accessible for maintenance meant the skin was downgraded to a less substantial intervention — a lick of paint.

The first purple stretch, the girder that ran closest to the river, was painted in 2010. “Almost Purple” was the name of the color chosen for the accent beam, in part because of “the hue’s reflective quality,” said Cathy Jones, SHoP’s lead architect on the project. Legend has it a lilac tie worn by a member of the design committee sparked the initially purple impulse. The repaint together with lights installed to bounce off the girder worked to lighten up the previously gloomy zone. Tai chi is practiced next to a ball court. Residents lean on railings wide enough to act as tabletops as tourists take in the promenade.

Today the gloomy zone has indeed been transformed. After more than a decade of construction, completion of the final phase of the Esplanade’s revivification is estimated for Fall 2019. The park is already a much-used bike thoroughfare. Residents from the Lower East Side can be seen practicing tai chi or gazing out at the grand views of the East River and Brooklyn and Manhattan Bridges, views that also entice tourists to trickling up from Battery Park. Wall Street workers have after-work drinks in a new glass pavilion tucked beneath the FDR. “Almost Purple” paint is mixed in a truck, alongside other equipment that is used to ventilate the space while work is taking place. Michael Sellick, a union rep for the Bridge Painters Union, Local 806, which was active in calling on the State DOT to begin the repainting work. Before he began working on painting the FDR purple Sellick and his team spent five years painting the Brooklyn Bridge.

But with the Esplanade’s increased popularity came an increase in public exposure to paint flaking off the underside of the highway, most of it a utilitarian beige. “The paint was so old that it was chipping and falling right onto the public,” Michael Sellick, a representative for the Bridge Painters Local 806 union, recounts. Paint on the underside of the FDR was found by environmental health experts in 1995 to contain high levels of lead (though officials have denied the danger). Local 806 maintains thousands of bridges and overpasses around the city by removing rust, rot, and corrosive salt and applying new protective layers of paint, and has been involved in advocating for and executing the painting upgrade of the FDR, including holding a rally at the site in 2016.

“They kept saying they were going to fix it, but for years nothing was done,” Sellick recalls of the FDR project. Yuh-Line Niou, then campaigning for state office, and now Assemblymember for District 65, supported Local 806’s call to clean up the area. In a statement through an aide, Niou was clear that lead removal, and not a love of purple, motivated her support: “The area has been widely used by our community but has not received the attention for improvement that it deserved. The peeling toxic lead paint was a significant public health risk to children and seniors who most utilized the park.” Hooks used to anchor a hanging walkway to girders. Scaffolding and other components of the hanging walkway are stacked as they are taken down.

As Local 806 painters began to repaint the entire section of the FDR underside that runs through the park, one purple accent beam gradually turned into hundreds of columns and many more miles of color. The decision was not made by the original Esplanade design team, but by the State of New York’s Department of Transportation, the body in charge of maintaining the FDR. The decision was made to “carry the color choice throughout the whole viaduct rather than using multiple colors,” said Thomas Bayer from the DOT. View towards Battery Park. In the background a wrapped section of pillars and girders can be seen.

Repainting the overhead area while the park remained open meant extensive measures had to be taken to minimize the risk of exposing the public to paint dust containing toxic material. The painting team hung a platform structure from the beams above by cable and hooks, and lined the working space with plastic sheeting to ensure that none of the dust created from sandblasting could escape before being vacuumed up. Protective tarpaulins also extended down to wrap pillars, temporarily suggesting a Christo intervention at the East River’s edge. A purple truck? With sides that fold upward like wings, this truck acts as a moveable platform, holding up workers and allowing them to get close to beams while catching drips along the way. The funnel allows grit and paint flecks to be vacuumed immediately as older layers of paint are sandblasted off. Before the final coat of purple polyurethane is applied, workers from the Bridge Painters 806 Union sand blast off the previous layers of paint. Three layers of under-coat are applied. First a zinc layer, and then two mid coats of camel-colored epoxy which can be seen on the downpipe here. Finally, the “almost purple” paint is applied. A worker applies a final layer of “stripe coat” around the edges of bolts, rivets, and welds, areas that are prone to corrosion without sufficient coverage.

For the last 15 months, 806 Union members contracted by Ahern Painting have been working in crews of 50 in two shifts, day and night, to bring a little more periwinkle to New York City. The East River is projected to rise 2.5 feet in the next 30 years, and the future is uncertain for any public space along the East River. But after waiting for decades for this park to be completed, residents are already keenly using the space. A park with a roof is a rare thing, and the natural aversion one might have to spending time underneath a freeway is tempered by the protection from the elements that the FDR currently provides. In the winter, dogs can be walked out of the rain; in the summer, the park provides respite from city heat with the breeze coming off the river and now the all-purple roof providing shade overhead. Purple puddle: the girders above are reflected in a puddle below. Purple rain: droplets of purple paint can be seen in all parts of the esplanade.

All photographs courtesy of the author.

As a regular bike commuter under the FDR, I experienced the bike path in all seasons, weather and times of day. The single purple girder was a welcome improvement. But the lighting reflecting off the single girder at night was some of the best lighting I have experienced in NYC. There were no bright lights to blind you, no shadows and not overly bright. It was a pleasure to bike through and I hope it gets restored and extended whenever (and if ever) the painting and rebuilding project gets completed. I also hope that architects and designers take note for other locations instead of the overly bright and blinding with shadows lighting that passes for safe and appropriate lighting around the city.

On Allen Street, "mall-terations” attest to the way an art intervention can foster a sense of transformative possibility and community involvement in the design and programming of public space.

Artist Julia Jacquette and writer James Trainor discuss Jacquette's graphic memoir, Playground of My Mind, digging into the sandbox of their memories and a critical chapter in the history of New York City's public spaces.

Hester Street Collaborative's Anne Frederick and Dylan House discuss a temporary pop-up public space on the Lower East Side that creates an asset for the neighborhood while informing and building momentum for the design of a future permanent park.